I began performing granular physics research during my Ph.D. where I focused on using rock physics models to understand the in-situ properties of sand. More and more, I am fascinated by the topic, especially because there is so much to learn about how microscale features organize to create emergent properties that geophysicist typically measure (e.g., seismic velocities). With developments in discrete element models, high-performance computing, and synchrotron-based x-ray microtomography, I believe that granular media physics studies will continue to be an exciting area of research for decades to come.

Constraining how both the physical properties and seismic responses of recently deposits sands change with time is important for understanding earthquake site response, subsurface fluid flow, and the early stages of sandstone lithification. Currently, however, there is no detailed (cm-scale) assessment of how sand physical properties and associated seismic velocities evolve over the first 1-2 centuries sand deposition. This study integrates sand-sedimentation rate estimates with seismic velocity and physical properties data to determine how the physical properties of vadose zone sands (upper 1.8-2.2 m) change within 180 years after deposition. The analyses at four sites along Port Royal beach Jamaica (Fig.1) show that compressional and shear wave velocities increase with sediment age whereas porosity, grain size, sorting, mineralogy and cementation fraction remain relatively unchanged during the same period. Though rock physics models (constrained by measured physical properties) predict constant seismic velocities, we observe larger misfits between modeled and observed velocities with sediment age. To explain the difference between models and observations, this study proposes that shallow sands undergo microstructural matrix changes (e.g., grain rolling, rotation, and slippage) that lead to a more uniform distribution of grain contact forces and a resulting increase in seismic velocities with time. The results imply that natural siliciclastic beach sands undergo a previously undocumented lithification process (similar to aging via contact creep) that occurs before compaction. 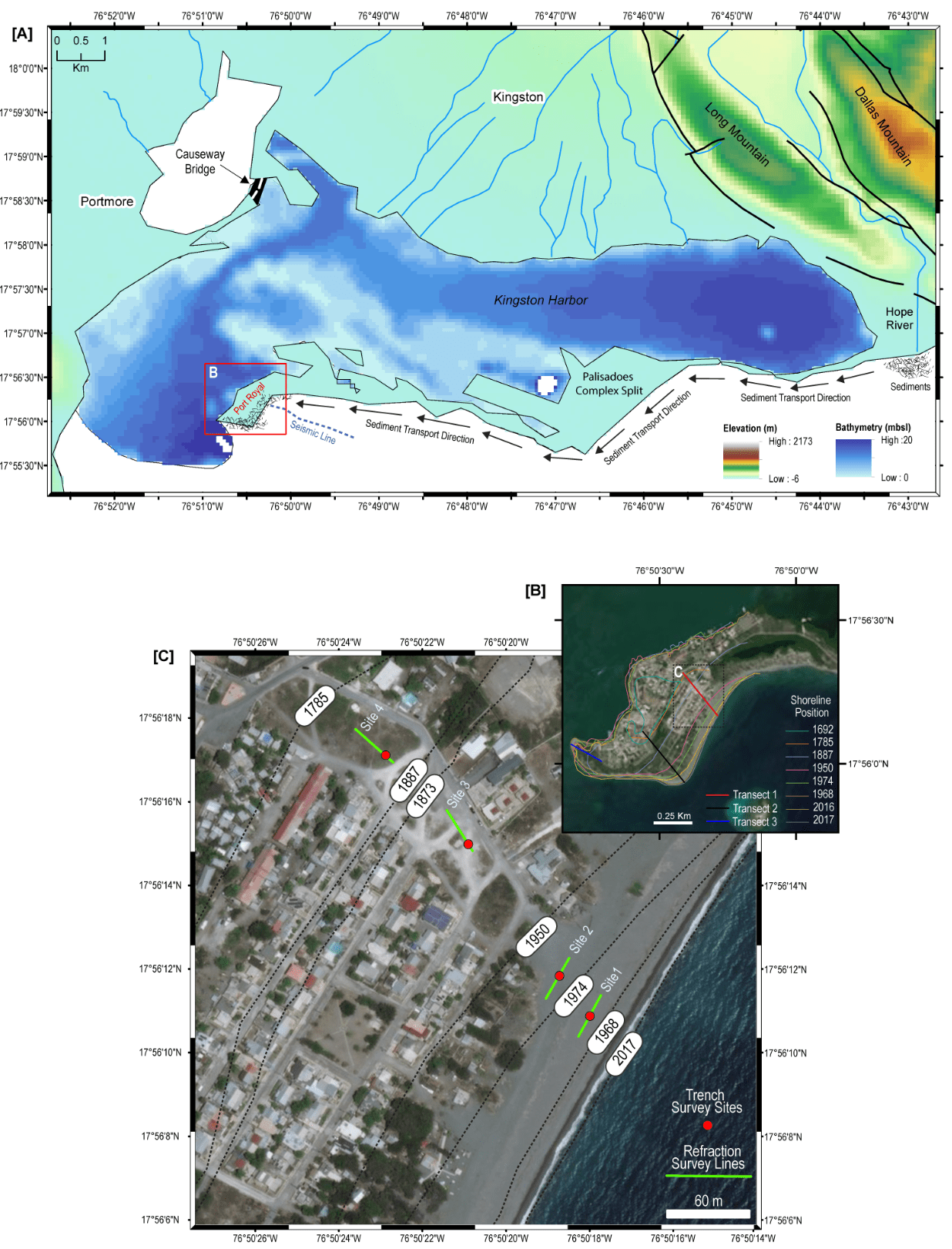 Figure 1. (A) Topographic map of Kingston Jamaica with locations for Port Royal and the Palisadoes Complex Spit identified. Blue dashed line is a seismic-reflection profile (Wright et al., 2019, Tectonics) used to determine slope. (B) Aerial Imagery map of Port Royal Jamaica showing shoreline positions and transects where we estimate sediment progradation rates, which were highest between sites 2-3 and lowest between sites 1 and 4. Site 1-4’s sediments were deposited between 1988-2016, 1956-1974, 1909-1923, and 1837-1862, respectively.

How effective are rock physics models for relating seismic velocities to the physical properties of sediments, fluids, and cement within the critical zone, and what factors most substantially influence the models’ accuracies? We answer these questions by testing and analyzing the accuracies of seven rock physics models (Hertz-Mindlin, Walton, Jenkins, Digby, stiff sand, soft sand, and contact cement) for estimating seismic velocities of vadose zone sands at Port Royal Beach in Jamaica. These sands are clean, well-rounded, and highly-spherical, which are ideal for rock physics model testing. Measured velocities and model input parameters (e.g., porosity, density, grain size, and fluid saturation percentage) derive from seismic refraction surveys and sidewall sediment cores, respectively. We find that, in their current forms, all seven rock physics models overpredict seismic velocities for sands deposited within the last forty-three years. Misfits between measured and predicted velocities reduce with time since deposition, with all but one (Digby) cementless models accurately predicting the seismic velocities for sands older than ninety-five years. Jenkins, followed by Walton, Hertz-Mindlin, and soft sand models are generally most accurate (i.e., have the lowest misfits), possibly because high porosity sands like the ones at Port Royal Beach are more susceptible to tangential slip during seismic wave propagation. The models will most substantially improve when the effects of the existence and locations of strong versus weak force-chain links are included in their respective equations. 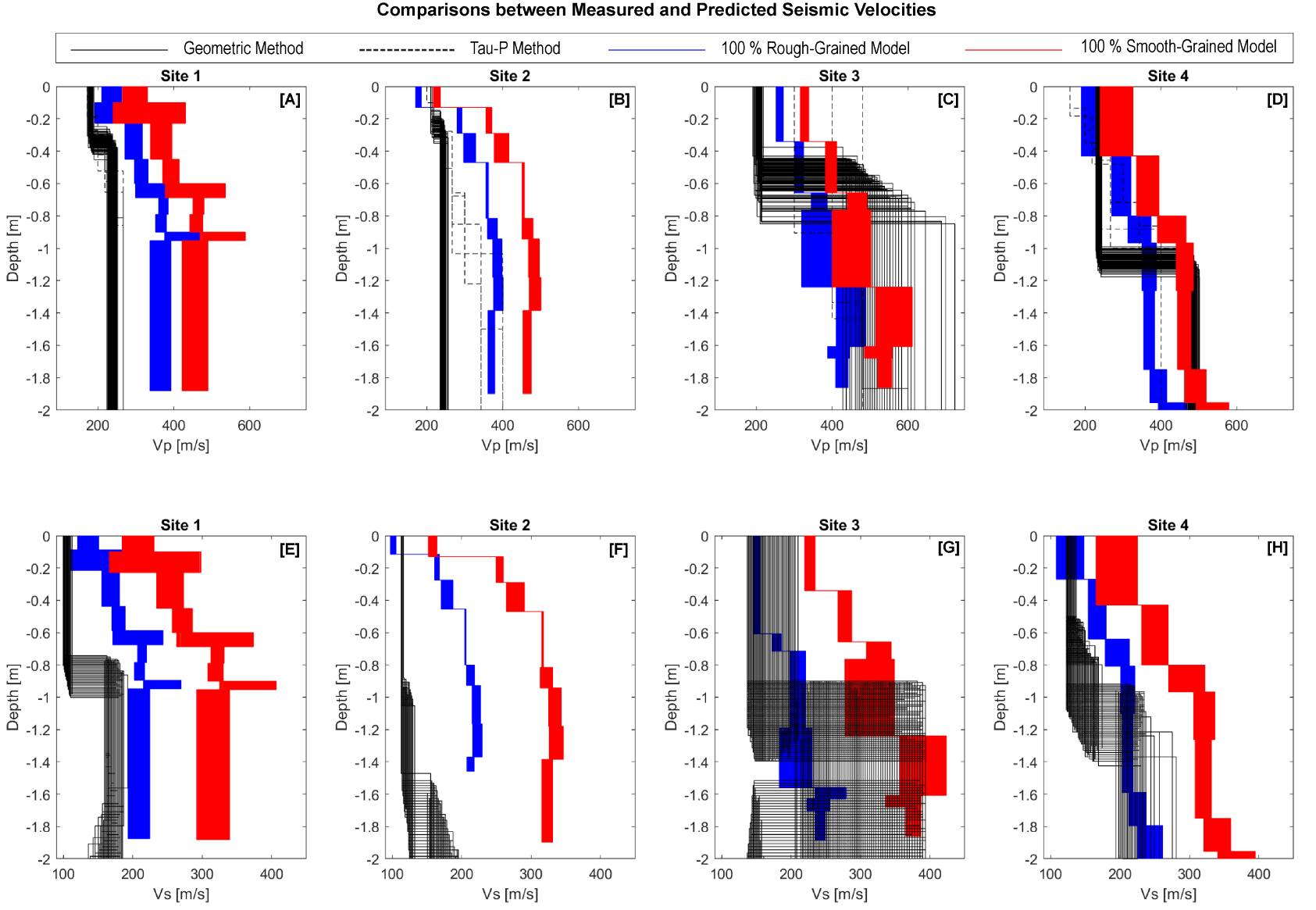 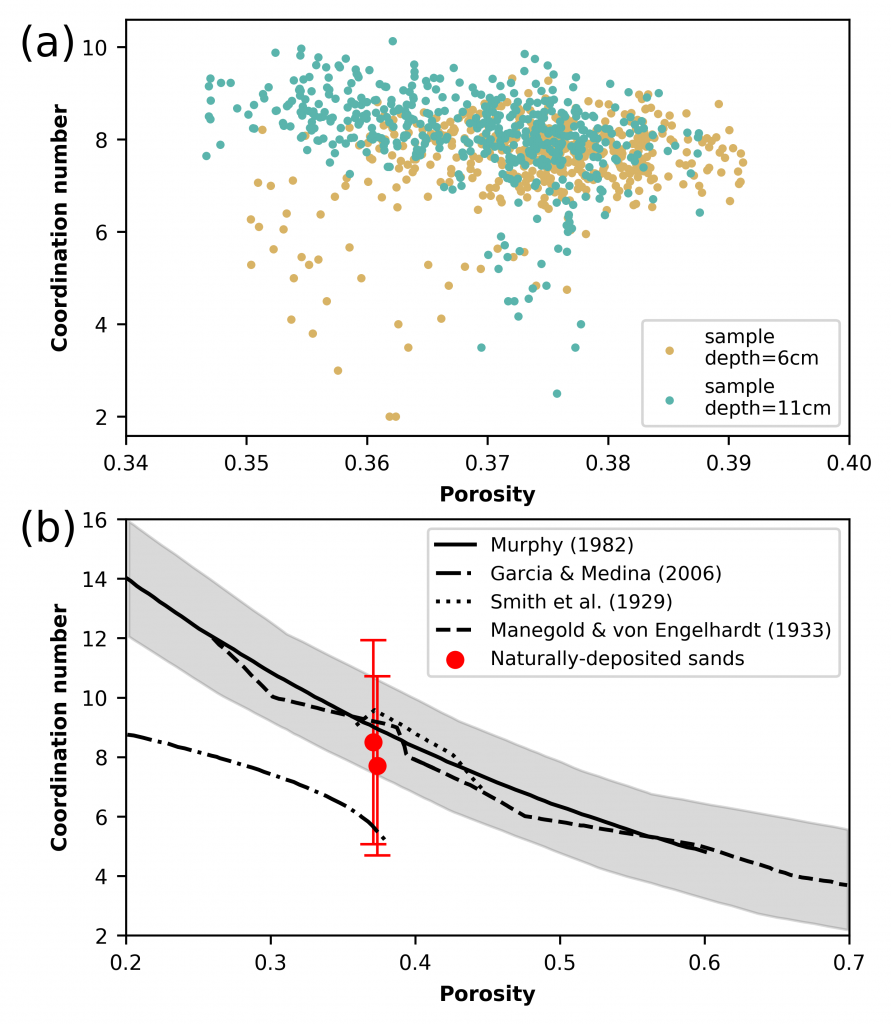 Figure 2. (a) Relationships between coordination number and porosity for natural sand at Alameda County beach, Berkeley, California.  (b) Comparison between coordination number in pluviated, modeled, and naturally-deposited sands. The gray shading is the standard deviation for the dataset produced by the Smith (1929) dataset. The image is modified from Mavko et al., (2020, the Rock Physics Handbook).

The aim of this project is to provide the first 3-dimensional assessment of the effects of earthquakes on the microstructural properties (e.g., grain contact number and area, grain orientation and, pore shape) of unconsolidated sediments. I am doing this based on the analysis of X-ray microtomography images taken before and after exposing sediments to lab simulated earthquakes. Quantifying these properties changes are important for understanding earthquake site response (including repeat liquefaction) and earthquakes induced changes to groundwater flow and storage. This work will also assess the consequences of earthquake-induced changes to sands. An example of the initial results of this study is shown in figure 1 below. 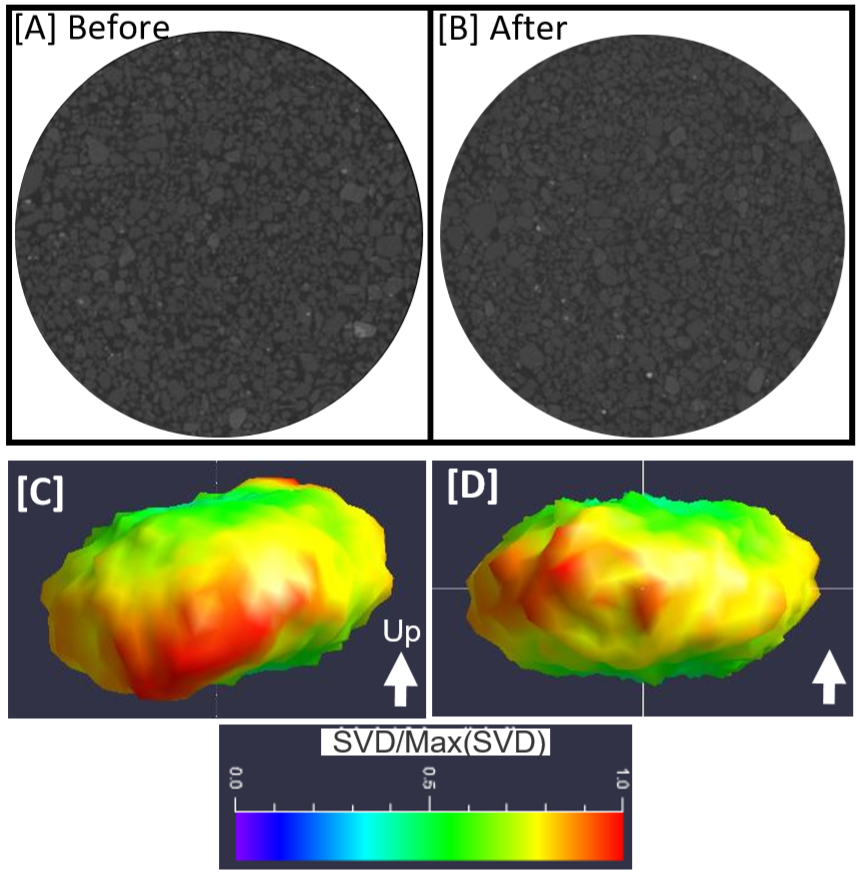