My tectonics research began when I was a Ph.D. student at SMU. There, I studied the history and societal impacts of active faulting within the Enriquillo-Plantain Garden Fault Zone (EPGFZ), which is a system of left-lateral faults extending through Eastern Jamaica and Western Hispaniola. In Jamaica, I focused on neotectonic deformation within the EPGFZ. In Hispaniola, I assessed tectonic, climate, and geomorphic controls on lake flooding. As a Postdoctoral Researcher at LSU, I have focussed on understanding tectonic and climate controls on continental erosion. Now a Postdoctoral Investigator at WHOI, I am focused on testing whether far-field paleoclimate modulated sedimentation patterns and rates influence strain localization and basin geometry during the initial stages of continental rifting.

Tectonics in Southeast Jamaica (Figure 1) is poorly understood, but the region may contain currently unknown faults that could generate large‐magnitude earthquakes. This study constrains tectonics in Southeast Jamaica by collecting and analyzing seismic and shallow sediment core data in and around Kingston Harbor. Seismic results reveal a previously unrecognized strike‐slip fault system that accommodates strain via a complex mix of compression and extension. The faults appear to be a blind extension of one major fault (i.e., The Bull Bay Strike‐Slip Fault) within the Enriquillo‐Plantain Garden Fault Zone. This fault system may represent significant hazards to Kingston Jamaica because the fault is active, located less than 5 km from the city, and a complete rupture of the fault could generate a Mw 5.8–6.9 earthquake. The analyses highlight the need for continued paleoseismic studies, both onshore and offshore Jamaica. 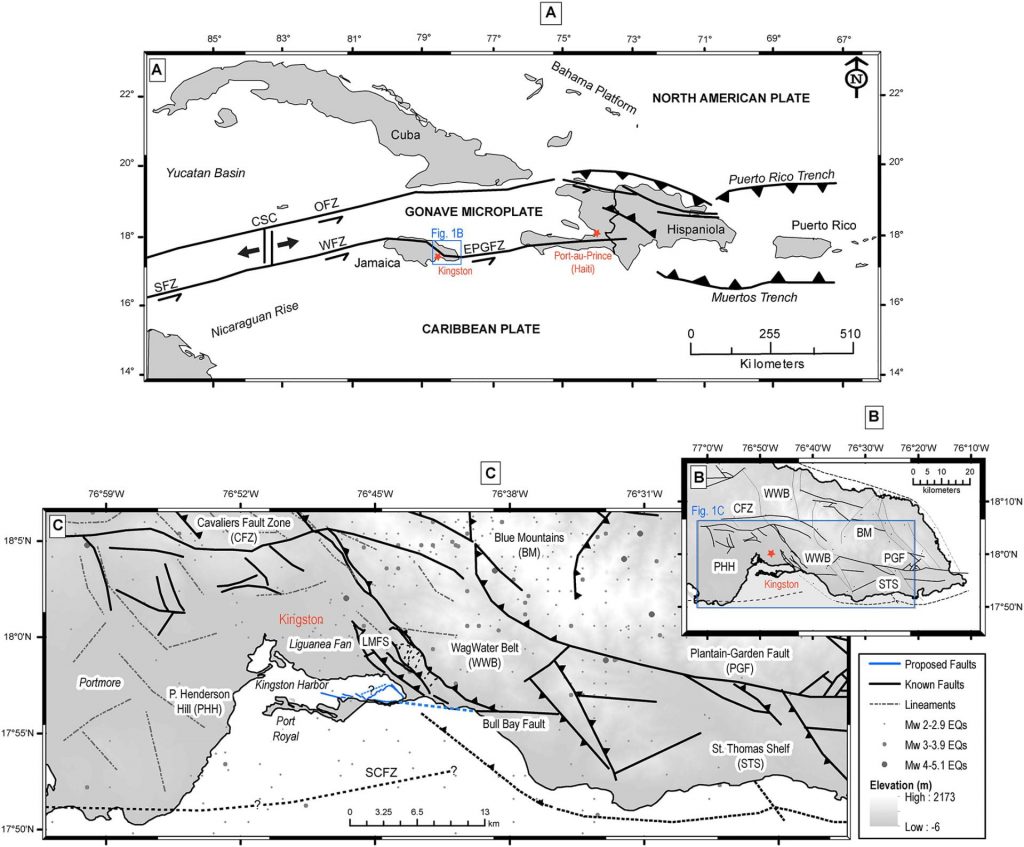 Figure 1. (a) Regional map shows that Jamaica is bisected by the Caribbean Plate and the Gonave Microplate. The country experiences intraplate shearing as a result. Map also shows the locations for the major plates in the region. These plates are bounded by the Enriquillo‐Plantain Garden Fault Zone (EPGFZ), the Walton Fault Zone (WFZ), the Oriente Fault Zone (OFZ), and the Cayman Spreading Center (CSC). (b) Map of Eastern Jamaica showing the locations of mapped faults and major tectonic structures that create the restraining bend flower structure. The abbreviation LMFS refers to the Long Mountain Fault System, which comprises of the Long and Dallas Thrust Mountains (see Figure 2a). (c) The figure is a more zoomed‐in map (blue box in Figure 1b), showing the faults, lineaments, and earthquakes locations in the region.

Lake level elevation at Lake Enriquillo and Lake Azuei, the two largest lakes in Hispaniola and in the Caribbean, respectively rose by 10 m and 5 m between 2004 and 2013 (Figure 1). Higher lake levels submerged towns, road systems, agricultural lands, and utilities, and threatened to submerge the major overland highway that connects the Dominican Republic and Haiti. This study used CHIRP seismic data, satellite imagery, and regional meteorological data to quantify and assess controls on lake level rises. The result showed that increases in hurricane activity and basin-wide hydraulic connectivity is the likely cause. I, along with my co-authors, propose that the lakes also experience intermittent periods of hydraulic connectivity along reactivated or newly developed stratigraphic-controlled sub-surface transport pathways. We also note that moderately small earthquakes along the large active fault system that extends through both lakes may promote or limit hydraulic conductivity on decadal or shorter time scales. The extents to which recent earthquakes have triggered changes in groundwater flow at this site remain unclear but represents an important topic of future research.

Figure 1. A map that focuses on Lake Enriquillo’s drainage basin and the hydrologic connection between the water bodies within and outside of the basin. Waterbody locations that have undergone hydrologic changes since 2003 are boxed and numbered; white lines indicate streams or man-made channels; gray lines within the lakes are the seismic track lines. The map also shows the pattern of the lake’s areal growth since 2004 and the location of the Enriquillo-Plantain Garden Fault zone (EPGFZ). Since 2004 the lake has grown significantly more easterly or westerly than northerly or southerly.

Continental erosion rates influence mountain formation and destruction, the filling of sedimentary basins, ocean chemistry, and the concentration of carbon dioxide in the atmosphere. Despite its importance for these and other geologic processes, a clear understanding of the primary drivers of continental erosion remains elusive. Currently debated drivers of continental erosion include changing tectonic activity, precipitation, temperatures, and glacioeustasy. The goal of this work to discuss the role of each geologic process in controlling long-term (Cenozoic-present) continental erosion and the flux of sediment entering the South China Sea (Figure 1), which encompasses only 0.9% of the global ocean area but holds 5.5% of its sediments. Ongoing results from this work demonstrate that continental erosions rates were high during the early-middle Miocene, middle Miocene, Pliocene, and Pleistocene due to the uplift of the Tibetan Plateau, changes from predominantly weak to strong Asian summer monsoon, and global glacial cycles respectively. 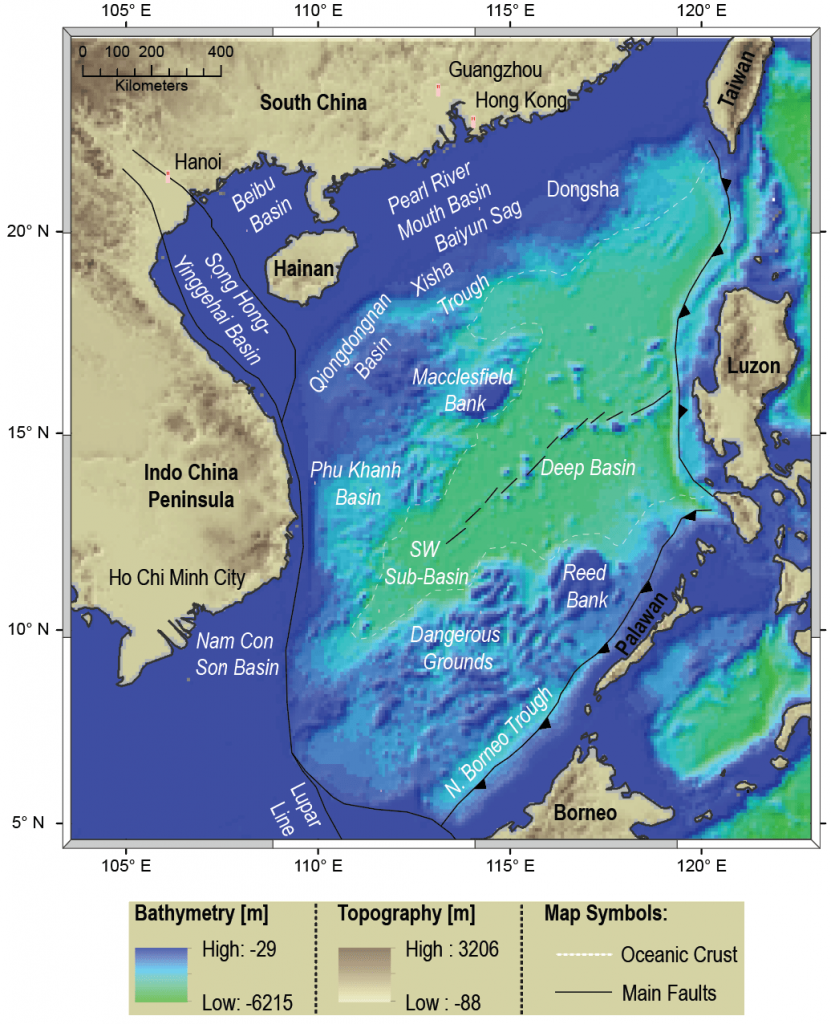 Figure 1. Map of the South China Sea highlighting the main sub-basins and fault structures within the sea.

The goal of this project is to determine if, how, and under what conditions far-field paleoclimate modulated sedimentation rates and patterns exert control on tectonic strain localization and fault development during the earliest stages of continental rifting, using the Okavango-Makgadikgadi Delta Complex in Botswana (Figure 1) as an example. This work is in its infancy as I have collected but not yet began interpreting river-borne HMS-620 bubble gun seismic-reflection profiles that penetrate down to 300 m below the subsurface with centimeter-scale resolution. Apart from providing insights into how rifts initiate, an additional benefit of this work is that it is expected to provide insights into the influence of paleoclimate changes on early hominid migration in Southcentral Africa. 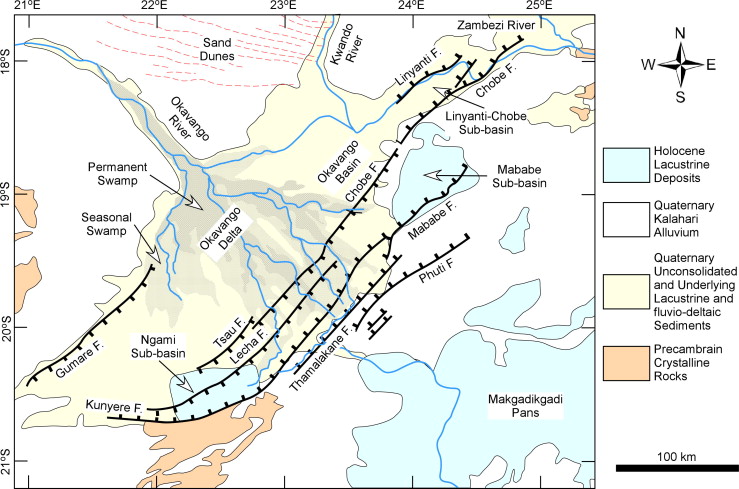 Figure 1. Map from Bufford et al., (2012, Journal of African Earth Sciences) showing a proposed fault model for the Okavango Rift Zone, based on magnetotelluric and electrical resistivity tomography imaging. I am in the process of imaging the rift zone using seismic reflection profiles, which provides a clearer picture of where faults extend within the rift zone.